Aberdulais was one of many industrial hotspots in centuries past and a major transport interchange. The

trail links Tonna via the Neath and Tennant Canals, the Tinworks and Waterfall site.

The Neath Canal was surveyed as far back as 1791 by Thomas Dadford and work commenced in that year; was completed between Abernant {Glyn Neath) and Neath by 1795 and extended to Briton Ferry by 1842. The 17 km/ 10.5 mile route cost £40,000 and had 19 locks, one of which, Tyn-yr-Heol {pictured) is on the route described.

A typical scene along the towpath of the Neath Canal

The Walk: Route summary and Terrain

n.b. this walk is not suitable for disabled people

Cross the canal at the Tonna Lock with its attractive, recently restored, Lock House, and turn right on to the canal towpath.

Follow the path for about one kilometre; on the left is an unattractive gas distribution depot, and right the canal under a steep, well wooded, slope. At Aberdulais, cross the road then under the railway bridge to Aberdulais Canal Basin. 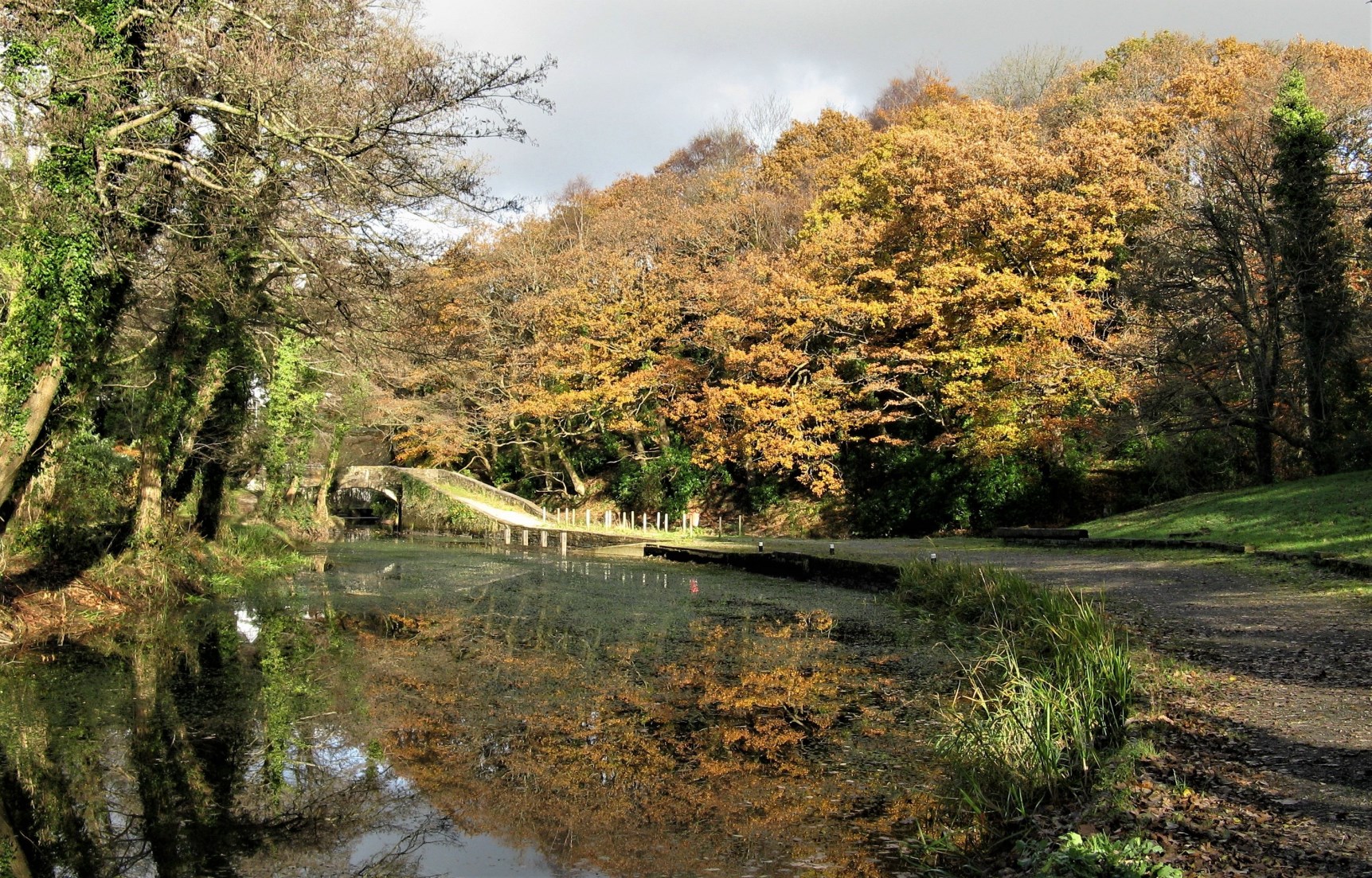 An autumn scene at Aberdulais Canal Basin. The Neath Canal is on the right

The Basin was the junction between the Neath (Glynneath-Briton Ferry) and the Tennant (Aberdulais-Port Tennant) Canals; also a loading and transfer point for freight traffic. Commercially, the Neath Canal was carrying 150,000 tonnes of coal by 1820 rising to a peak of 200,000 tonnes, mostly transferring to the Tennant Canal. The Tennant crosses the river Neath on an aqueduct (extant in poor condition) south of the basin, followed by a lock.

Take a short walk towards the river to see the aqueduct which takes the canal over the river Neath, and thereafter, the bridge carrying the Vale of Neath Railway. 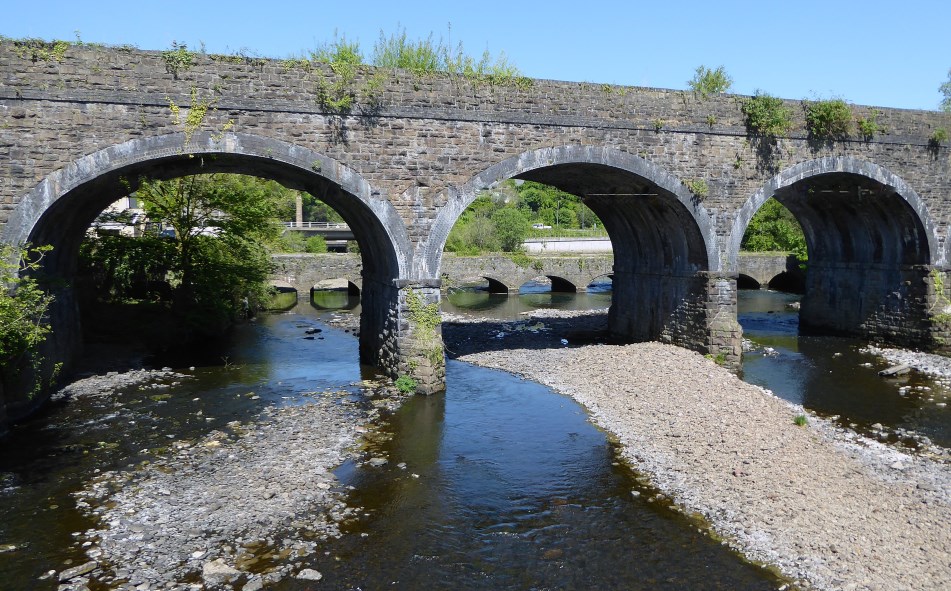 The Vale of Neath Railway opened in 1851 between Aberdare (later also Merthyr) and Neath; its main purpose was carriage of coal and minerals from the Taff and Cynon valleys to Swansea Docks Acquired by the Great Western Railway in 1865, it developed as a strategic mid-valleys route to Pontypool. Passenger trains commenced in 1853 and ran for 111 years, ceasing in 1964; there was a station at Aberdulais. Freight traffic continued until recently though the line is now ‘mothballed’ due to lack of mining activity.

Leave the canal basin, drop down to the road, turn right and proceed over the river, turn right again past the former lock house, over the canal and under the A465 emerging on to the A4109; turn right and you will see opposite, the entrance to Aberdulais Tinworks and Waterfall. 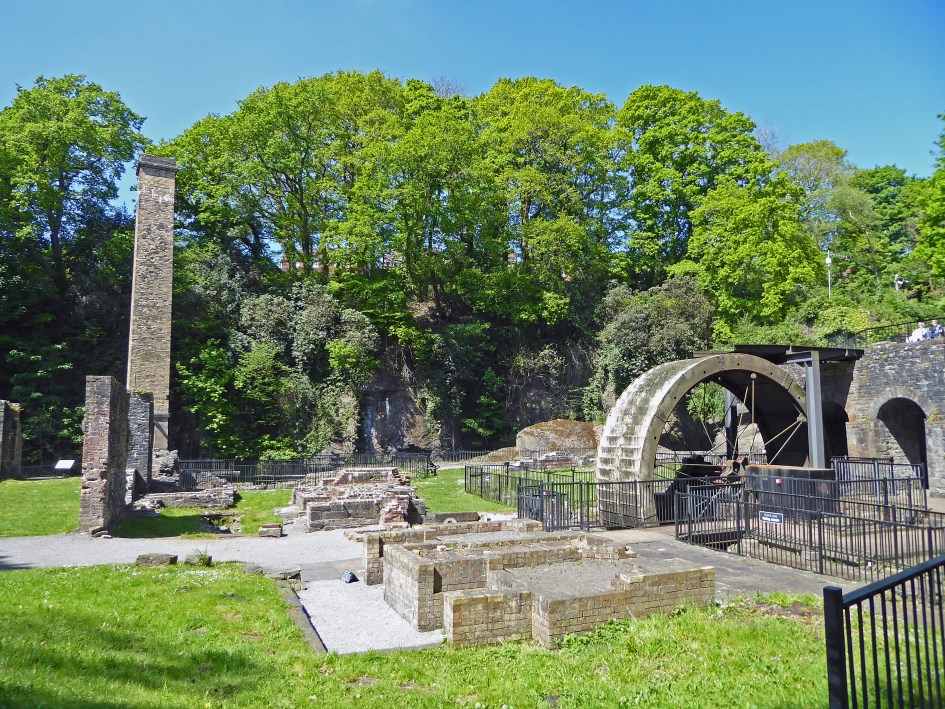 This site has a fascinating industrial past. Initially copper smelting was superseded by ironmaking, and finally manufacture of tinplate. This activity was powered by water from the Aberdulais Falls, assisted by a waterwheel powering turbines. The ftne Aberdulais Tinworks and Waterfall site has been tastefully restored by the National Trust which provides interpretation of the various aspects of the historic past (note that entrance fees are payable).